This week, we continue the focus on spiritualism, in our series of blog posts from MA students with this contribution from Yulia.

The late nineteenth and early twentieth centuries saw increasing interest in all things spiritual: from accounts claiming communication with ghosts, to public séance performances. The idea of consensual possession, or mediums channelling the spirits of the dead, was both amazing and frightening. Yet, the relationship between one of Britain’s most famous mediums and the spirits she claimed to channel reveals much more about her relationship with her audience than first thought.

Helen Duncan, born Victoria Helen McCrae Duncan in 1897, gained a reputation in the first half of the twentieth century as a renowned spirit medium. Travelling throughout Britain, Duncan became known for her séances: dressed in black and blindfolded, she would express her “channelling” of spirits through the production of “ectoplasm”, a white, cheesecloth-like substance from her mouth. The ectoplasm was said to disintegrate at the touch, and was seen as physical evidence of Duncan’s power to communicate with the spirits of the dead. Aided by her “spirit guide”, Albert, Duncan would reveal messages to her audience, supposedly from the spirits she channelled, with the ectoplasm as a physical display of what could otherwise not be seen. 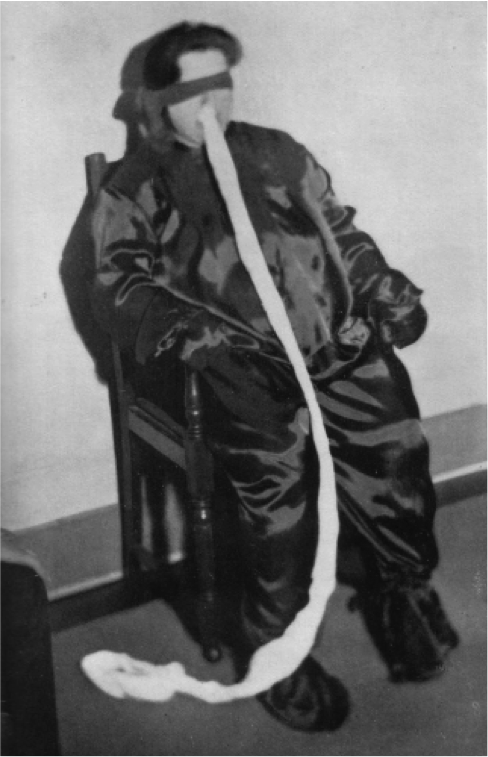 ‘The medium Helen Duncan with roll of cheesecloth as her fake ectoplasm’, from Price, Harry, ‘Regurgitation and the Duncan Mediumship’, Bulletin I of the National Laboratory of Psychical Research (1931).  Image © Wikimedia Commons.

Regardless of whether one believes in Duncan’s abilities or not, (her “ectoplasm” has most often been stated to be cheesecloth, hidden in her mouth or throat) the image she projected of herself as a medium is a fascinating one. A travelling medium, was, first and foremost, a performer—one that had to engage with their audience and create a certain image in order to capture minds and hearts. Duncan certainly did this: having her audience seated in a circle, holding hands, established the feeling of a connection between both herself and her audience, as she connected the living with the dead. Her choice of clothing, her black robe and blindfold, on the other hand, project a sense of restraint and control, adding to the theatrical qualities of her performance. Duncan, in the image to the right, appears isolated from external influence, and thus totally attuned to her spiritual focus. It is clear that as a performer, Duncan thus clearly paid attention to her image.

However, there appears to be a discrepancy between Duncan’s status — restrained, possessed, helplessly bound — and her reputation as a woman of great power. How can being subjected to the whims of the supernatural, forced to produce ectoplasm, contribute to an image of power? In some respects, Duncan appears no different from medieval and early modern accounts of demonic possession: speaking with a “voice” other than her own and expressing uncharacteristic knowledge while in a trance and restrained. The ectoplasm adds to the image of Duncan as a vessel, its “production” representing a loss of control over her body. The séance thus becomes a public display of female violation, a spiritual one that is perhaps symbolic of sexual violation. It is a shocking image, and one that, at first, seems to be a show of weakness and submission, not power.

So, how did this image become a representation of power? Did audiences flock to Duncan’s performances to witness spiritual bodily violation? Were her performances profiting from curiosity about the bizarre, akin to a travelling circus? These are complex questions, and it is difficult to tell exactly why Duncan became popular. Few séance attendees’ accounts have survived, and a disproportionate are those of believers. Others are scathing and critical, and simply dismiss Duncan as a fraud without much thought regarding her performance. It is ultimately hard to judge what made her effective.

Yet, the explanation I prefer, one that I link to other female mediums active at this time, is the idea of “power through powerlessness”. Duncan appears paradoxical, choosing to display her body in a bound, victim-like state—but the key to understanding her methods is that she was choosing. Duncan performed of her own volition, and importantly, during séances, controlled her own trances. Being able to use her “power” freely, when and in the ways she desired, meant that Duncan was fundamentally in control of her own body. Though the production of ectoplasm appears to represent a loss of control, Duncan did so only when she desired.  This was a crucial part to any female medium’s performance. The power of the medium not only involved channelling, but also limiting the actions of the dead upon the world of the living. This element of control is ultimately what led to Duncan’s image of power: not only her ability to channel the supernatural, but most importantly, that she could control it.

Being able to control her trances was thus key to establishing Duncan’s relationship with her audience. The spirits of the dead were seen as something that most humans could not convene with, and if they could, then not without great danger. Duncan’s almost violated, ectoplasm-spewing body served as a warning sign to her audience: that what she was doing was beyond the ability of others, and that this set her apart from her audience. Yet with a warning came reassurance. Duncan, in her performance, displayed control over the supernatural, and her audience would leave the séance unharmed despite any initial fear. The sharp contrast between her restraint and calmness, and the potential danger from the unknown is thus what created her powerful, in-control image.

Duncan thus captivated her audience by creating a safe, controlled environment and contrasting this with the image of danger that was her own powerless body. In the way that an animal tamer could perform with a dangerous beast and escape unharmed, Duncan appealed to her believers with a show of her self-control, experience and fearlessness when it came to the spirits of the dead. Whether you believe in her abilities or not, it cannot be denied that Helen Duncan did have one great power: that of the able performer, one who most certainly captivated and put on a show for her audience.

Informative and fascinating article on Duncan as a performer.

A fantastic article on female mediums and ectoplasm, including images (some are graphic).

2017 interview with Duncan’s descendant on her work and legacy.